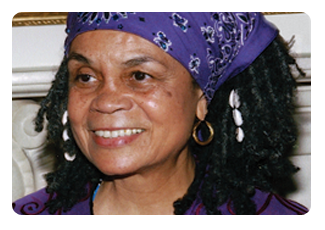 Sonia Sanchez, born in Birmingham, Alabama on September 9, 1934, is the author of over 20 books including Homecoming, We a BaddDDD People, Love Poems, I’ve Been a Woman, A Sound Investment and Other Stories, Homegirls and Handgrenades, Under a Soprano Sky, Wounded in the House of a Friend (Beacon Press 1995), Does Your House Have Lions? (Beacon Press, 1997), Like the Singing Coming off the Drums (Beacon Press, 1998), Shake Loose My Skin (Beacon Press, 1999) and most recently, Morning Haiku (Beacon Press, 2010). In addition to being a contributing editor to Black Scholar and The Journal of African Studies, she has edited an anthology, We Be Word Sorcerers: 25 Stories by Black Americans.

BMA: The Sonia Sanchez Literary Review is the first African American Journal that discusses the work of Sonia Sanchez and the Black Arts Movement. A recipient of a National Endowment for the Arts, the Lucretia Mott Award for 1984, the Outstanding Arts Award from the Pennsylvania Coalition of 100 Black Women, the Community Service Award from the National Black Caucus of State Legislators, she is a winner of the 1985 American Book Award for Homegirls and Handgrenades, the Governor’s Award for Excellence in the Humanities for 1988, the Peace and Freedom Award from Women International League for Peace and Freedom (W.I.L.P.F.) for 1989, a PEW Fellowship in the Arts for 1992-1993 and the recipient of Langston Hughes Poetry Award for 1999. Does Your House Have Lions? was a finalist for the National Book Critics Circle Award.

She is the Poetry Society of America’s 2001 Robert Frost Medalist and a Ford Freedom Scholar from the Charles H. Wright Museum of African American History. Her poetry also appeared in the movie Love Jones. Sonia Sanchez has lectured at over 500 universities and colleges in the United States and has traveled extensively, reading her poetry in Africa, Cuba, England, the Caribbean, Australia, Europe, Nicaragua, the People’s Republic of China, Norway, and Canada.

She was the first Presidential Fellow at Temple University and she held the Laura Carnell Chair in English at Temple University. She is the recipient of the Harper Lee Award, 2004 Alabama Distinguished Writer, and the National Visionary Leadership Award for 2006. She is the recipient of the 2005 Leeway Foundation Transformational Award and the 2009 Robert Creeley Award. Currently, Sonia Sanchez is one of 20 African American women featured in “Freedom Sisters,” an interactive exhibition created by the Cincinnati Museum Center and Smithsonian Institution traveling exhibition. In December of 2011, Philadelphia Mayor Michael Nutter selected Sonia Sanchez as Philadelphia’s first Poet Laureate, calling her “the longtime conscience of the city.