Willie Mae Thornton was born on December 11, 1926, either near Montgomery, Alabama or in Ariton, Alabama, a small town in Dale County. Better known as “Big Mama” Thornton, for both her size and her powerful voice, she was a blues singer and songwriter whose career spanned more than 40 years. She is best known for her fiery 1952 rhythm and blues recording of “Hound Dog,” later covered by Elvis Presley, and for her original song “Ball and Chain,” made famous by Janis Joplin. Thornton’s compositions include more than 20 blues songs. 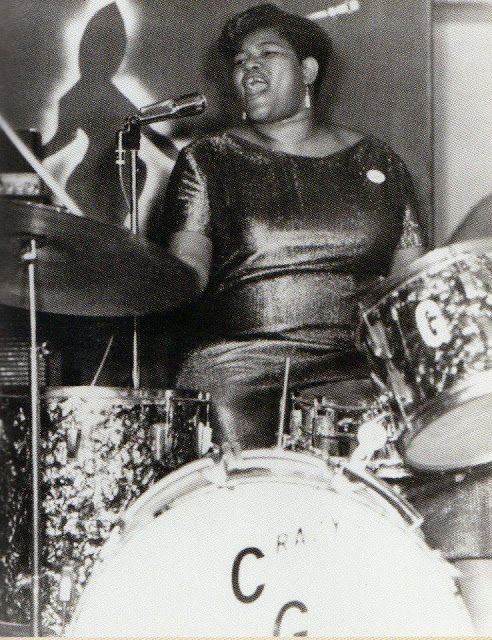 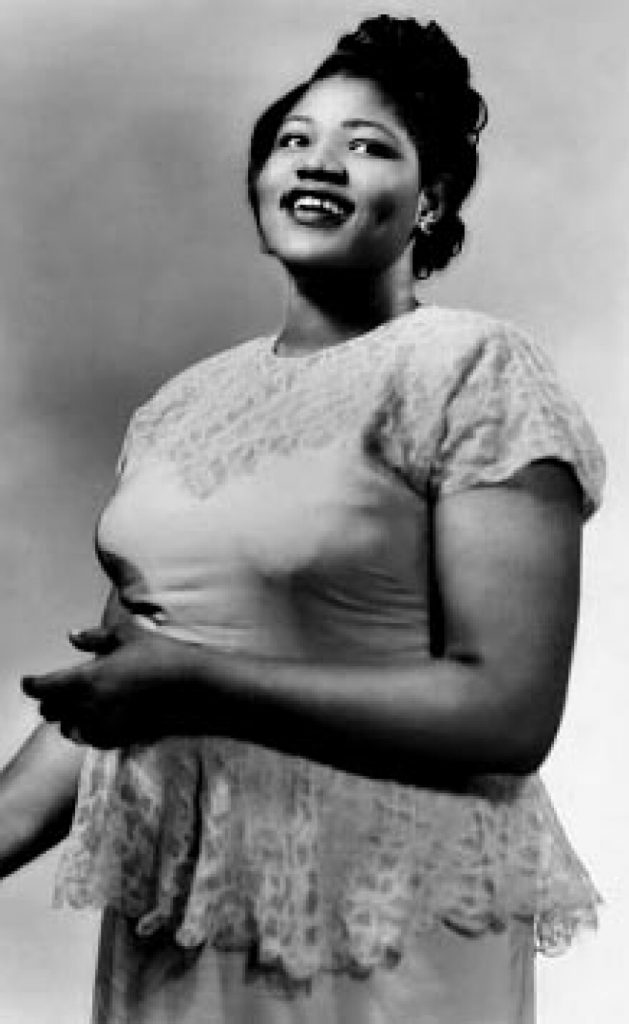 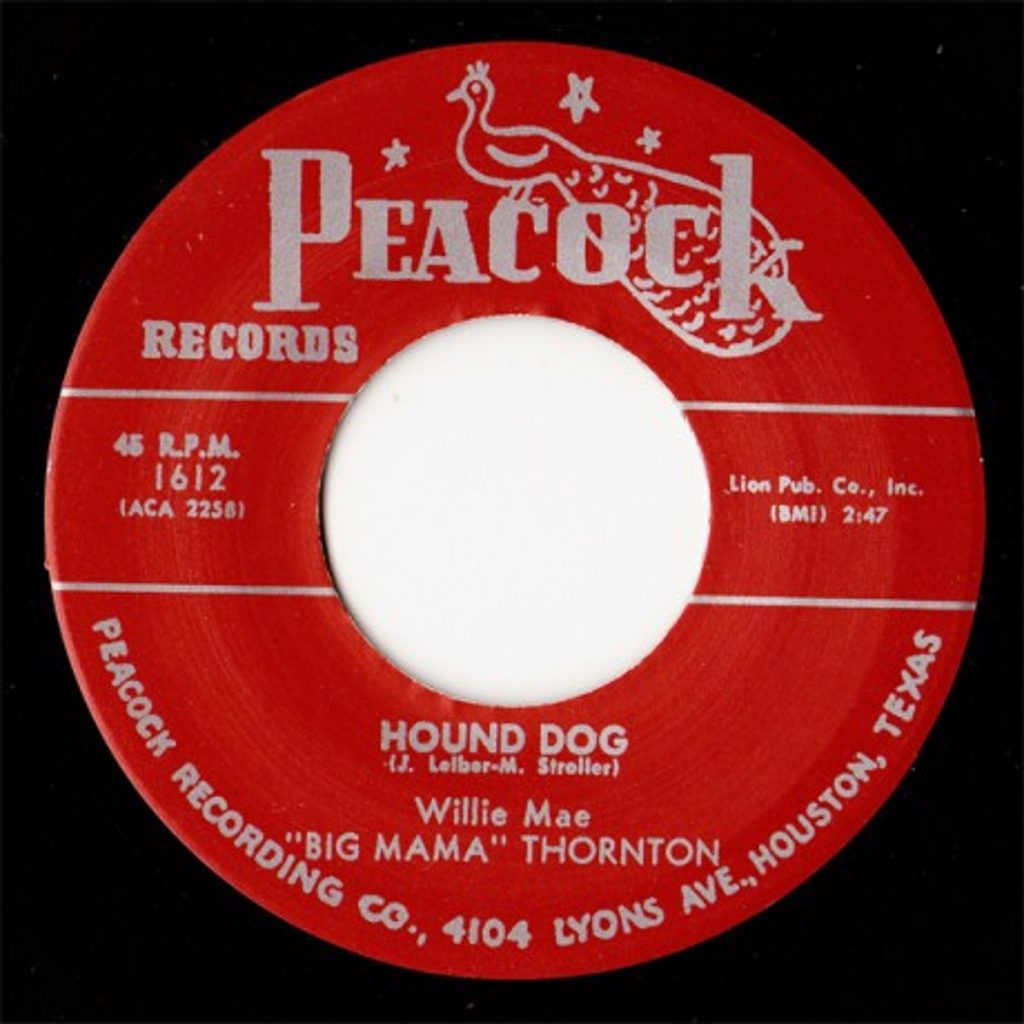 Thornton’s mother died when she was 14, and she left home to pursue a career as an entertainer. At the very young age of 15, Thornton caught the eye of Atlanta music promoter Sammy Green and he offered her a spot in his Georgia-based show, The Hot Harlem Revue. Thornton stayed with the Hot Harlem Review for seven years, traveling throughout the south. Early in her career Thornton was influenced by the singing styles of Bessie Smith, Ma Rainey, Junior Parker, and Memphis Minnie. She was billed as the new “Bessie Smith,” but everyone soon realized she was uniquely “Big Mama” Thornton.

Thornton moved to Houston in 1948, where her music career flourished. In 1951, Thornton signed with Don Robey’s Peacock Records. Robey, a highly successful black entrepreneur, signed her to a five-year contract. Peacock Records, later called Duke-Peacock, was a rhythm and blues and gospel label. It became an important influence on soul and rock music and featured artists such as Marie Adams, Johnny Ace, and Little Richard.

Throughout the early 1950s Thornton regularly performed at Robey’s Houston club, The Bronze Peacock, and on the “Chitlin’ Circuit” with bandleader Johnny Otis. The “Chitlin’ Circuit” was a string of clubs and venues that covered the southern and eastern United States and were considered safe for African American musicians to perform. They ranged from the Cotton Club in New York’s Harlem neighborhood to local juke joints in Mississippi.

In 1952, during a recording session in Los Angeles, Jerry Leiber and Mike Stoller offered Thornton a 12-bar blues vocal called “Hound Dog.” When it was released in 1953, it skyrocketed to the top the R&B charts and stayed there for seven weeks. Despite its sale of two million copies, Thornton received only $500. In contrast, Elvis Presley’s 1956 version brought him both fame and considerable financial reward.

In the mid-to-late 1950s, after her contract with Peacock Records expired and interest in blues music declined in favor of rock, Thornton moved to San Francisco to perform with her old friend Clarence “Gatemouth” Brown, a former Duke-Peacock artist. Thornton stopped recording but continued to perform in the Bay area. However, by the early-to-mid 1960s traditional blues was staging a revival spurred by the enthusiastic interest of artists such as Bob Dylan, Eric Clapton, and the Rolling Stones, and the Bay Area became a center of blues activity. Fortunately, for Thornton, Janis Joplin’s (a great admirer of Thornton) version of “Ball and Chain” became her signature song and helped revived interest in Thornton. Thornton became a mainstay at the Monterey Jazz Festival and toured Europe with the American Folk Blues Festival. 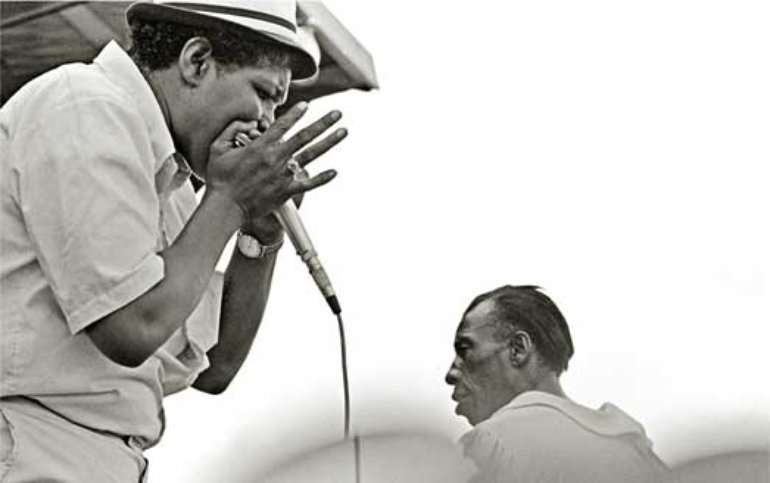 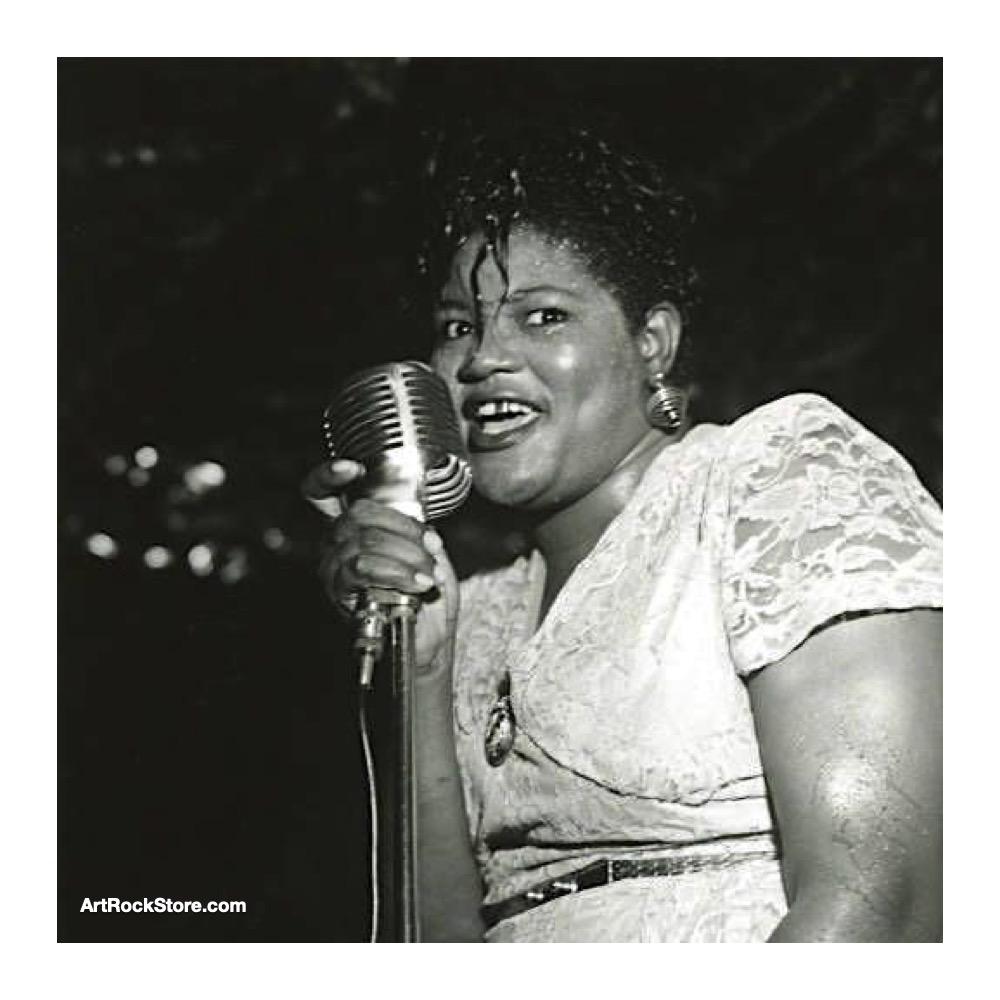 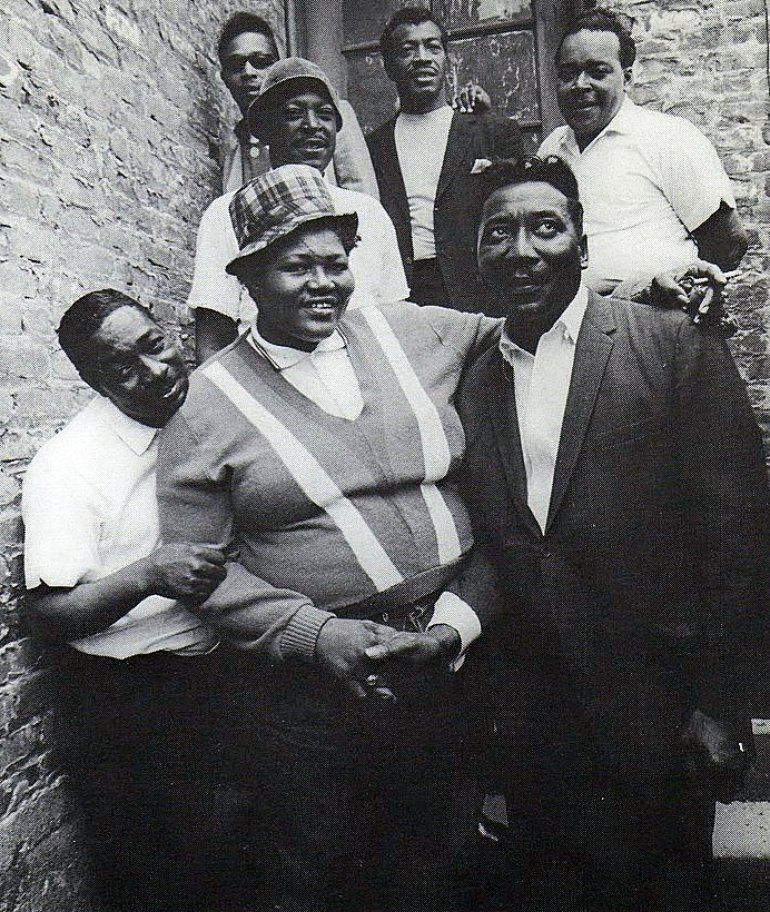 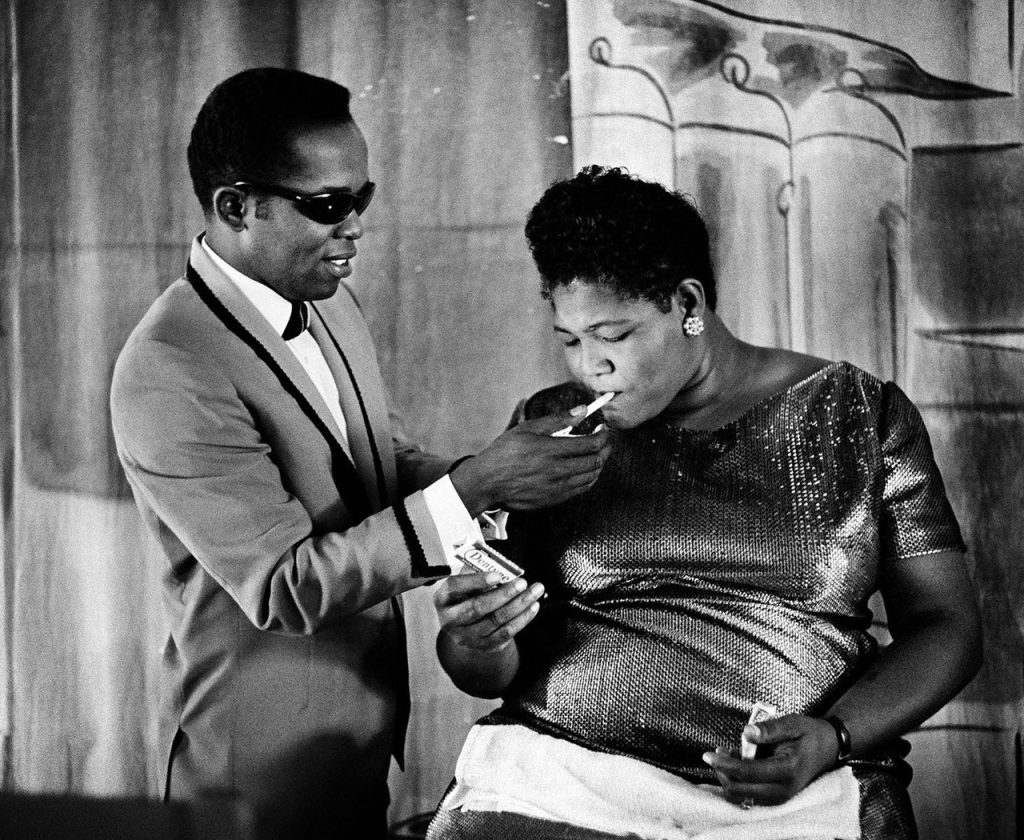 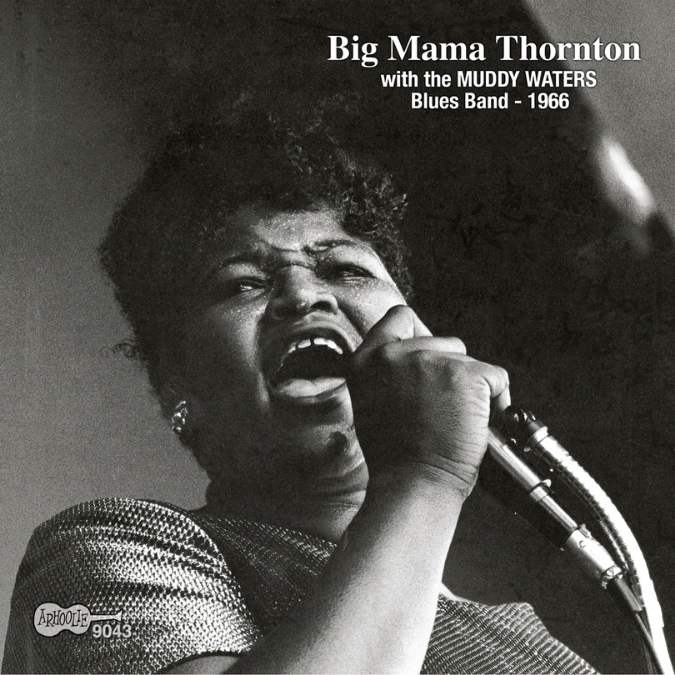 Above:  Cover of an Arhoolie album release featuring Thornton with Muddy Waters’ band, 1966. 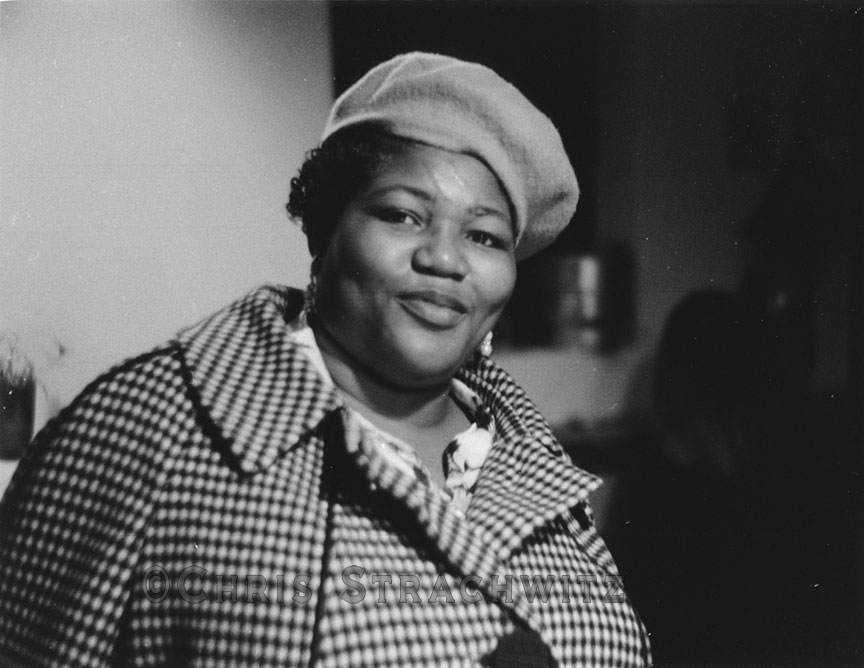 Above:  Cover of an Arhoolie album release featuring Thornton with Muddy Waters’ band, 1966.

In the 1960s, Thornton started recording again and made several albums for the Arhoolie label, including collaborative albums such as Big Mama Thornton In Europe (1966), backed by Buddy Guy, Walter Horton, and Freddy Below; Big Mama Thornton with the Chicago Blues Band (1966), with Muddy Waters, Sam “Lightnin'” Hopkins, and Otis Spann; and Ball & Chain (1968), a compilation of original work by Thornton, Hopkins, and Larry Williams. In September 1968, Thornton appeared at the Sky River Rock Festival with a lineup that included the Grateful Dead, James Cotton, and Santana. 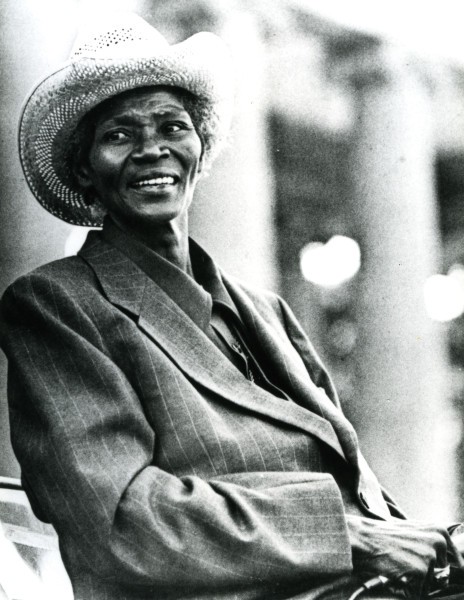 Thornton’s popularity continued to grow throughout the 1970s, however, years of heavy drinking began to affect Thornton’s health. At the 1979 San Francisco Blues Festival, despite being seriously ill and needing assistance to take the stage, she gave a stunning performance. After surviving an auto accident in the early 1980s, Thornton performed at the 1983 Newport Jazz Festival with Muddy Waters, B. B. King, and Eddie “Cleanhead” Vinson, resulting in a live recording, The Blues—A Real Summit Meeting.