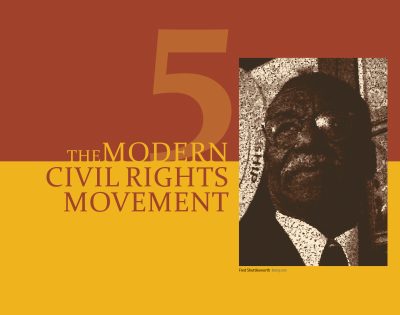 During the era known as the Modern Civil Rights Movement, many historical, social, political, and cultural revolutions occurred. Of these monumental transformations, the focus for African Americans was seeking equal rights, equal justice, prohibiting discrimination, and ending segregation.

As soon as slavery ended in 1865, African Americans in Alabama began fighting for their basic civil and human rights. After the American Civil War, the 13th, 14th, and 15th amendments were added to the United States Constitution. These amendments were supposed to guarantee all Americans, regardless of previous servitude their freedom, equal rights, voting rights, and due process of law. However, in Alabama and the South, this was not the case. Jim Crow laws were passed immediately after the case of Plessy versus Ferguson in 1896. This case upheld the “separate but equal doctrine.” 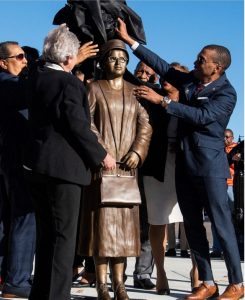 Many protests and events occurred from the early 20th century through the 1950s raising attention of the inadequacies, atrocities, unequal justice, and civil and human rights violations effecting African Americans daily.  Nevertheless, on Thursday, December 1, 1955, a civil rights activist and humble seamstress by trade named Mrs. Rosa Louise McCauley Parks defied a Montgomery, Alabama city segregation ordinance. She boarded the city bus and sat one row behind the section marked “whites only.” As the bus filled with passengers, the white bus driver ordered Mrs. Parks to get up out of her seat for a white man to sit. She refused. The bus driver summoned the police and she was jailed for violation of Montgomery’s segregation ordinance. Her defiance sparked the Montgomery Bus Boycott. And its success launched nationwide efforts to end racial segregation of public facilities. This one major event became the catalyst that started the Modern Civil Rights Movement. Mrs. Parks earned the title of “the mother of the freedom movement”.

The movement in the 1950s and 1960s was marked by nonviolent protests, marches, and lunch counter sit-ins. White people from around the nation joined African American Freedom Riders, foot soldiers, and other unsung heroes to draw attention to the segregation and discrimination in the South.  These citizens risked their lives to help shape democracy.

During this period major civil rights demonstrations and events occurred in cities such as Montgomery, Birmingham, Selma, Tuskegee, Anniston, and Tuscaloosa, Alabama. The movement transformed Alabama as well as the rest of the nation. Major legislation was passed that forbade Jim Crow laws. A whole century of legal segregation ended and new opportunities for African Americans emerged.

Even though the movement did not solve every problem caused by racial discrimination, it helped forge a more open democratic Alabama.