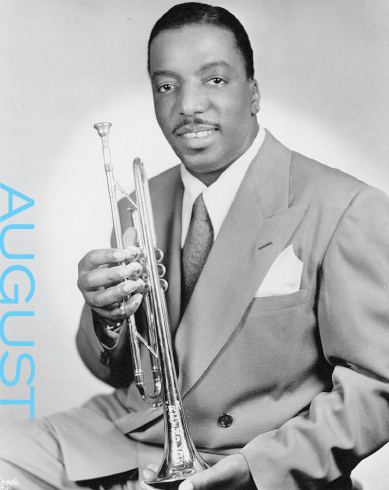 Hall of Fame trumpeter, composer and bandleader scored big with musical homage to his hometown

ERSKINE HAWKINS, BORN IN BIRMINGHAM, ALABAMA on July 26, 1914, was a renowned trumpeter, big bandleader, and composer. Nicknamed the “Twentieth-Century Gabriel,” because of his heavenly trumpet play, Hawkins gained fame as a member of the ‘Bama State Collegians, one of the finest college bands in the 1930s. In 1938, Hawkins formed Erskine Hawkins & His Orchestra, which became a popular dance band, packing venues across the country and prestigious clubs such as the Roseland and Savoy in New York City. Hawkins had several hit recordings, including his signature song “Tuxedo Junction,” “Tippin’ In,” “Don’t Cry Baby,” and “After Hours.” Some of the vocalists who were featured with his orchestra include Ida James, Delores Brown, and Della Reese. Hawkins is a member of the Alabama Music and Alabama Jazz Halls of Fame.

At age six Hawkins started school at Tuggle Institute (now Tuggle Elementary School), excelling in music and athletics. Under the direction of the school’s band director, he first played drums, trombone, and saxophone, before concentrating his talents on the trumpet. He was nearly always at the school, either playing music or on an athletic team playing basketball, football, and tennis. As a young child, Hawkins played music in the local park and was inspired by the sounds he heard. As a teenager, Hawkins attended Birmingham Industrial High School under famed music educator John T. “Fess” Whatley.  He also formed a band with Bob Range, Haywood Henry, and other boys from the school, eventually playing in Birmingham’s clubs.

Hawkins spent many hours developing his craft at Tuxedo Junction, a streetcar intersection on the Ensley-Fairfield line in Birmingham that was a center of nightlife for African Americans from the 1920s through the 1950s.  Tuxedo Junction was comparable to Harlem in New York City. In 1930, at the age of 16, Hawkins graduated from Birmingham Industrial and moved to Montgomery to attend State Teachers College (now Alabama State University) on a tennis scholarship, but gave that up to major in music and join the Collegians, one of the college’s three bands. In the early 1930s, the three bands toured to make money for the school. While touring the South and Midwest, the Collegians gained a reputation as one of the best college bands in the country. Led by J. B. Sims, it played jazz and dance tunes, but also military music and symphonic pieces. Hawkins graduated in 1934, but stayed on to teach music and play with the band.

Hawkins and the Collegians first earned fame in 1934, when touring the Northeast. While in Asbury Park, New Jersey, musicians from New York City came to hear them play, and the band was invited to the Harlem Opera House and Brooklyn’s Fox Folly. When the opportunity came to turn professional, Hawkins and most of the band members decided to stay in New York. After turning professional, Hawkins became the bandleader and, in 1935, started recording for Vocalion Records as the ‘Bama State Collegians featuring Erskine Hawkins. In 1938, the band changed its name to Erskine Hawkins & His Orchestra and signed with RCA Victor Records. Because of their increasing popularity, the group was signed as the house band at the Savoy Ballroom in Harlem and would often compete in “battle of the bands” competitions with guest bands, including Glenn Miller, Duke Ellington, and Lionel Hampton.

Hawkins scored his first hit in 1939 with “Tuxedo Junction,” and the tune became the band’s signature song. During his career, Hawkins recorded dozens of songs.  His last recording was an album featuring a reunion of his old bandmates in 1971. In 1978, Hawkins was inducted into the Alabama Jazz Hall of Fame. In 1989, he was given a Lifework Award for Performing Achievement by the Alabama Music Hall of Fame. Hawkins’ birthday is celebrated each July at the “Function in the Junction” in Birmingham.  The event takes place at a park near the old Tuxedo Junction, which was renamed Erskine Hawkins Park in his honor. Hawkins died on November 11, 1993, and is buried in Elmwood Cemetery in Birmingham.