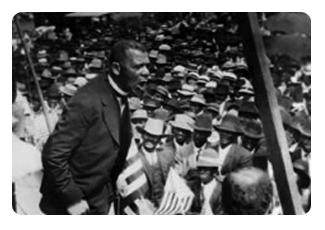 Born a slave in Virginia (1856), receiving an education would probably be less likely for Booker Taliaferro Washington. However, Washington had a different outlook: education was a worthy fight. He decided that working in a salt furnace and coal mine days were over. Determined to be educated, he fought to attend Hampton Normal and Agricultural Institute in Virginia (1872). Nevertheless, this was not a simple journey. Washington walked miles just to gain an opportunity to attend Hampton, and then he worked as a janitor to stay there. He believed that “character is not so much the position that one has achieved in life, but by the obstacles in which one has overcame.”

Surely, his character would take a dramatic shift upon graduation from Hampton in 1875. The obstacles in which he overcame made him the man that we all learn and cherish today. In 1881, Washington got an opportunity to be the first principal of Negro school in Macon County, AL. Uneducated, poverty stricken blacks living in broken shanties, would be the circumstances surrounding this new negro school. Despite the problems of such a social environment, Washington accepted the challenge and went to work. The school opened on July 4, 1881, at a local church and under his leadership, as Tuskegee Normal School for Colored Teachers. He abandoned the idea of the talented tenth or gaining full civil rights instantly. Instead, he believed if the Negroes cultivated their skills for building and farming, then they have achieved their own independence. The Negro had to learn to rely on him or herself. Despite the harsh criticism he received, he kept focused on his goal: to educate the uneducated.

Today, the once Tuskegee Normal School is now Tuskegee University. The campus still stretches over the same abandoned plantation field that Booker T. Washington moved it to over 125 years ago. Washington was adamant about relying on one’s self. In fact, most of the original buildings were made by his students and are still standing on the campus today.

His struggles helped to develop his personality and commitment. During his time Washington, was the most influential Black man in the nation. He gave speeches that were so eloquently written and delivered that people were drawn to tears. He set the stage for the black intellectual and is a profound example of the black leader. From being the first African-American on the postage stamp to being welcomed in the White House despite the color of his skin, he has definitely left his mark on the work and should be one of the most celebrated men in American history.

Washington was a humble man. Even in his prime, he believed that it was never his position that determined his character but the sleepless nights, the walk from Malden to Hampton and the hardships for opening a school that determined his character. Profoundly expressed by Booker Taliaferro Washington, “If you want to live a life of genuine pleasure, do something for somebody else. It is the quiet, unseen giving which never reaches the ear of the world that makes possible the existence of the best things of the world.” It is without a doubt that Washington’s life work was all about doing “something for somebody else.” He literally worked himself to death in 1915 at the age of 59 because he cared deeply for his life’s mission: leadership, knowledge and service.