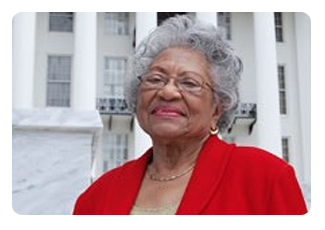 Distinguished educator, Dr. Ethel Hall, has the distinction of being the first African American to serve as Vice President of the Alabama State Board of Education, a position that she held for ten consecutive terms. Hall is also the longest serving member of the current board, having represented board district 4 for the past 23 years. In 2004, Hall declined to be named as vice president again and the board honored her with the title of Vice President Emeritus.

A native of Decatur, Ala., Hall is known as an advocate for students as well as educators statewide. As a member of the state board, she has served with integrity and has been described as a member who always “does her homework” when deciding on key issues.

Also known as a dedicated community servant, Hall is a member of the board of directors of the Birmingham Civil Rights Institute, the National Conference of Community and Justice, the Women’s Exchange, Birmingham Museum of Art, and the Alabama Archives and History Foundation. She has also held positions with the Education Commission of the States, the Governor’s Commission on Instructional Improvement and Academic Excellence, and the National Commission on Teaching and America’s Future. Hall is the recipient of more than 200 honors and awards including being named by the “Birmingham Business Journal” as one of the Top Ten Women Making a Difference and in 1999 was awarded the NASBE Distinguished Service Award by the National Association of State Boards of Education.

Hall was married to the late Alfred Hall for 55 years.