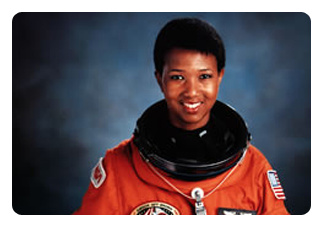 Dr. Jemison’s remarkable life, in addition to being a doctor, engineer, scientist, academic, entrepreneur, and public intellectual, includes six years with NASA as a space shuttle astronaut during which she became the first woman of color in the world to go into space.

Prior to joining NASA in 1987, she served as the Area Peace Corps Medical Officer for Sierra Leone and Liberia in West Africa. As an astronaut, Jemison had assignments as a liaison between the astronaut corps and launch operations at Kennedy Space Center, served on the human research protocol board, testing the software that operates the shuttle and flew aboard the Space Shuttle Endeavour Spacelab Japan mission—the first joint mission with the Japanese Space Agency. Jemison resigned from NASA in 1993 and founded the technology consulting firm, The Jemison Group, Inc., to consider socio-cultural impacts when designing technologies. As an Environmental Studies professor at Dartmouth College from 1995 through 2001, she taught courses on sustainable development and technology design. Her latest business venture, BioSentient Corporation, focuses on physiological monitoring to improve health and human performance.

A strong, committed voice for science literacy, in 1994 Jemison founded the international science camp The Earth We Share™ for students 12-16 years old. In her book Find Where the Wind Goes, she writes for teenagers about growing up on the south side of Chicago, cultivating her aspiration to be a scientist and professional dancer, her experiences as a medical student in Africa, and her history-making journey into space.

Jemison was an A.D. White Professor-at-Large at Cornell University and is a member of several Fortune 500 corporate boards; Jemison is a member of the National Academy of Sciences’ Institute of Medicine, an inductee of National Women’s Hall of Fame and the National Medical Association Hall of Fame, and winner of the Kilby Science Award. In 1993 she was chosen one of People Magazine’s “World’s 50 Most Beautiful People” and in 1999 in the White House Project Straw Poll she was voted as one of the top seven women leaders most likely to become President of the United States.

Dr. Jemison entered Stanford University at the age of sixteen on a scholarship and graduated with a B.S. in Chemical Engineering and a B.A. in African and Afro-American studies. She subsequently earned her M.D. at Cornell University.

Dr. Jemison resides in Houston and lives with her four cats Dallas, Sapphire, Nathan and LeShawn. Jemison has also appeared in documentaries on space flight as well as her African-American roots and hosted the television series “ World of Wonder”. A Star Trek fan in her youth –Nichelle Nichols, aka Lt. Uhura, is one of her best friends now – she played a role in an episode in the series’ popular sequel, Star Trek: The Next Generation. In keeping with her track record of distinction, Dr. Mae Jemison is the only “real” astronaut ever to appear on the series.

Other interesting facts:
Jemison narrated The Planets symphony by Gustav Holst, with the US National Symphony Orchestra at the Smithsonian Museum in 2009.
She worked in a Cambodian Refugee camp in Thailand.
She has been a guest at the White House twice in 2009—with Mrs. Michelle Obama for Women’s History Month and with President Obama and Mrs. Obama for Astronomy Night on the White House Lawn.

She donates her time, money and resources for many causes, but particularly in effort to promote widespread science literacy and technology proficiency for developing countries. The US Embassy named a science Reading Room in South Africa after her. Cats are her favorite beings n the planet—can’t say about off planet. Jemison dilemma graduating from college—becoming professional dancer or engineer. Recently designed and built ultra-modern home that is sustainable, automated, warm and livable and includes a specially designed dance room.

Jemison is an expert in sewing and designing clothes, grills a great barbeque and at one time did her own silkscreen and block print greeting cards. Honorary member Alpha Kappa Alpha Sorority, Inc. the oldest African American sorority in the United States.