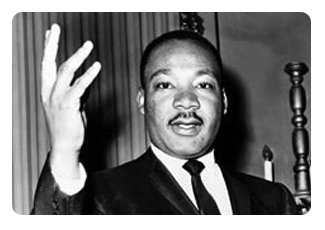 Martin Luther King Jr. is known as the Father of the Modern Civil Rights Movement and for his participation in the Montgomery Bus Boycott in Alabama. As a Baptist minister and social activist, he led the Civil Rights Movement in the United States from the mid-1950s until his death by assassination in 1968.

King attended segregated public schools in Georgia, graduating from high school at the age of 15. After high school he attended Morehouse College, the alma mater of both his father and grandfather. He received his B.A. degree in 1948. After three years of study at Crozer Theological Seminary in Pennsylvania, where he was elected president of a predominantly white senior class, King was awarded the Bachelor of Divinity degree.

He married Coretta Scott on June 18, 1953, on the lawn of her mother’s home in Marion, Ala. In 1954 the couple moved to Montgomery and King became pastor of the Dexter Avenue Baptist Church. Always a strong activist for civil rights, he became a member of the executive committee of the National Association for the Advancement of Colored People (NAACP), the leading organization of its kind in the nation. He also was a co-founder of the Southern Christian Leadership Conference (SCLC), serving as its first president. In December 1955, King led the Montgomery Bus Boycott, the first Negro nonviolent demonstration in the United States.

In 1963, King led the March on Washington where he delivered his famous “I Have a Dream” speech before a crowd of more than 250,000. The speech established King’s reputation as one of the greatest orators in modern history.

At the age of 35, King became the youngest man to receive the Nobel Peace Prize for his nonviolent, civil rights efforts. When notified of his selection, he announced that he would turn over the prize money of $54,123 to the advancement of the Civil Rights Movement.

On the evening of April 4, 1968, while standing on the balcony of his motel room in Memphis, Tenn., where he was to lead a protest march in sympathy with striking garbage workers of that city, Martin Luther King was assassinated.

He was posthumously awarded the Presidential Medal of Freedom in 1977 and the Congressional Gold Medal in 2004. Martin Luther King, Jr. Day was established as a U.S. national holiday in 1986.

Photo Credits: Courtesy of the Library of Congress, LC-USZ62-126559