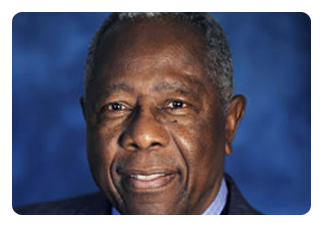 At the age of fifteen, Aaron had his first tryout with an MLB franchise, the Brooklyn Dodgers; however, he did not make the team. Aaron later joined the Mobile Black Bears, an independent Negro league team. His minor league career began on November 20, 1951, when baseball scout Ed Scott signed Aaron to a contract on behalf of the Indianapolis Clowns.

Aaron enjoyed a 23-year major league career during which he rewrote baseball’s hitting record book. He held more major league batting records than any other player in the game’s history, including most home runs, lifetime, 755 and most runs batted in, lifetime, 2,297. On May 17, 1970, Aaron became the first player to compile both 3,000 career hits and more than 500 homers. Along with Frank Robinson, Aaron was inducted into the Hall of Fame at Cooperstown, NY, on August 1, 1982.

Aaron sits on the board of Retail Ventures, Inc., Medallion Financial Corporation, the Atlanta Braves and Atlanta Falcons. He is a member of the Board of Governors for Boys and Girls Clubs of America and is a member of the Board of Councilors of the Carter Center. With his wife Billye, he is the founder of the Hank Aaron Chasing the Dream Foundation. Aaron has received numerous civic awards, including the Medal of Freedom, awarded by President Bush, and the Presidential Citizens Medal, awarded by President Clinton.