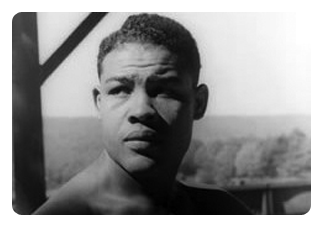 Joe Louis Barrow was born in La Fayette, Alabama on May 13, 1914. His father, “Mun Barrow,” was a cotton picker from Alabama and his family fought poverty for most of his childhood. The Barrow family moved to Detroit in 1924, at which point Louis first became involved in boxing.

Louis burst onto the professional boxing scene in 1934 with style and skill such as the boxing world has seldom seen. His boxing prowess, as well as his reputation, grew at an incredible rate. Known to many as the “Brown Bomber,” Louis emerged victorious from his first 27 fights, all but four of which he won in knockouts. In the early days of his career, he destroyed a number of prominent heavyweight fighters, giving a premonition of his coming reign of domination.

Louis was seemingly invincible, until his defeat by German boxer Max Schmeling on June 19, 1936. In 1937 Louis won the Heavyweight Championship from James J. Braddock, an historical accomplishment, yet Louis felt there was a dark cloud hovering over the title because of his 1936 loss to Schmeling. When Louis met Schmeling in 1938 to defend his title to the man who gave him his only defeat as a professional, the match was dubbed the “Battle of the Century.” Louis defeated Schmeling by a knockout in two minutes and four seconds of the first round. With his victory in the ring, Louis gained a moral victory for himself and earned the admiration of his country while simultaneously striking a damaging blow to Adolf Hitler and his propaganda about the superiority of the white race.

Louis is a boxing legend. He knocked out five world champions during his career, and he still holds the distinction of having successfully defended his title more times than any other heavyweight in history, 25 times.

When he died in 1981, Joe Louis was eulogized – and continues to be known – as one of the greatest prizefighters of all time and a unique American Hero.