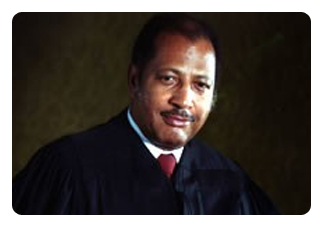 Oscar William Adams was a pioneer of Alabama’s judicial system. Born in Birmingham, Ala., on February 7, 1925, Adams was the son of a Birmingham newspaper publisher and the grandson of a member of the Alabama Legislature. Adams made state history as the first African-American Alabama Supreme Court justice and the first African American elected to statewide office in Alabama.

Adams’ distinguished legal career spanned more than three decades. He received a bachelor’s degree from Talladega College (1944) and then earned a law degree from the Howard University School of Law (1947).

In 1966, Adams became the first African American to join the Birmingham Bar Association. He first partnered with white attorney Harvey Burg, forming the state’s first integrated legal practice. Adams later founded his own law firm with James Baker and U. W. Clemon (Adams, Baker and Clemon) one of the foremost law firms to litigate civil rights cases in the 1960s.

In 1980, Adams’ career was advanced further with his appointment to the Alabama Supreme Court. Appointed by Governor Fob James, he again made history, becoming the first African American to serve on any appellate court in the state of Alabama and later the first to be elected to any statewide constitutional office in Alabama’s history. He was re-elected to the court for two terms, once in 1982 and again in 1988. He retired from the bench on October 31, 1993.

Adams died on February 15, 1997. He was honored posthumously by being inducted into the Alabama Lawyers Hall of Fame in 2005 and into the Birmingham Gallery of Distinguished Citizens in 2008.