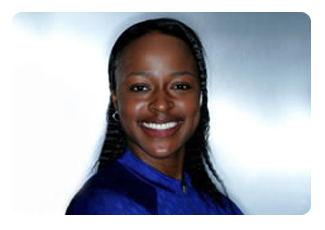 Vonetta Flowers was born October 29, 1973 in Birmingham, Alabama. Vonetta holds the honor of being the first person of African descent (male or female)from any country to win a GOLD medal in the Winter Olympics!

At the early age of nine, Vonetta started her Winter Olympic road to gold, but it was in a Summer Olympic sport. She was recruited as a track athlete and over the next ten years Vonetta won almost every race she entered. While in high school, in addition to track and field she also participated in volleyball and basketball.

In 1992 Vonetta graduated from P.D. Jackson Olin High School and became the first in her family to attend college, when she accepted a Track and Field scholarship to the University of Alabama at Birmingham. By the time she graduated, Vonetta was one of the university’s most decorated athletes, with 35 conference titles and victories in the Penn Relays and The Olympic Festival, and its first Seven-Time All-American.

Vonetta competed in both the 1996 and 2000, US Summer Olympic Trials, but was unsuccessful in her quest to earn a spot on the team. She hoped to have an outstanding performance at the 2000 Olympic Trials, but a few months before the trials began, Vonetta found herself lying on a hospital bed getting ready for her 5th surgery in 8 years. After a disappointing performance at the 2000 trials, Vonetta felt it was time to retire from Track and Field, with hopes of starting a family.

Two days after the 2000 Olympic Trials ended, Vonetta’s husband, Johnny, spotted a flyer urging Track and Field athletes to tryout for the U.S. bobsled team. Johnny had also been an outstanding Track and Field athlete, and after several hours of joking back and forth about trying out for the bobsled team Johnny was ready to go. Shortly after the competition started, Johnny pulled his hamstring, and Vonetta agreed to live out his dream by completing the six-item bobsled test. That unselfish act would quickly change their lives.

Less than 2 months after stepping in for Johnny, Vonetta was competing for the U.S. in bobsled. Vonetta’s Track and Field background was an advantage in bobsled, and she quickly became the #1 brake woman in the U.S. By the end of her rookie season, Vonetta and her teammate, Bonny Warner, were ranked 2nd in the US and 3rd in the world.

A year later Vonetta and her new partner, Jill Bakken, slid into history by winning the Gold Medal at the inaugural Women’s Olympic bobsled event, which was the 1st medal for a U.S. bobsled team in 46 years!