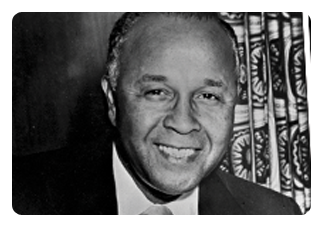 Percy Lavon Julian, born April 11, 1899, in Montgomery, Ala., was one of the premier scientists, business leaders, and humanists of his time. As the grandson of a slave, Julian was the eldest of six children born to James Sumner Julian, a railway mail clerk, and his wife Elizabeth Lena Adams.

When Julian finished the 8th grade, there was no public high school, which black children could attend, so Julian attended the State Normal School for Negroes in Montgomery, Ala. The curriculum at the State Normal School did not prepare Julian for the rigors of college work, so he entered DePauw University in Indiana as a sub-freshman, carrying college and high school courses simultaneously. Yet, he still managed to graduate valedictorian of his class.

Julian earned a master’s degree from Harvard. He taught at Fisk University and West Virginia State College, as segregation denied him teaching positions at white universities. In 1931, Julian earned his Ph.D. in organic chemistry, from the University of Vienna in Austria. Upon returning from Europe, Julian became head of Howard University’s chemistry department. A year later, he returned to DePauw University, as a research fellow. At DePauw, he made his first great discovery by developing physostigmine, a drug used to treat glaucoma.

Although a brilliant chemist, several companies refused to hire Julian in a management position because of his race.  Finally, in 1936 he became Director of Research at the Glidden Company, the first black scientist to hold such a position. Julian remained at Glidden for eighteen years, making numerous scientific breakthroughs.

Julian was dubbed the “soybean chemist,” because soybeans were the resource for many of his discoveries. From soybeans, he developed a fire fighting foam, which was used during World War II to extinguish fires aboard ships. He synthesized cortisone, used in the treatment of rheumatoid arthritis, asthma, lupus and other inflammatory conditions. Prior to his synthesis, cortisone was obtained from oxen bile and only afordable to the very rich. With Julian’s synthesis, cortisone became available to millions for pennies a drop. From soybeans, he also synthesized sex hormones. His synthesis of the female hormone progesterone went into the first birth control pill.

After leaving Glidden, Julian established his own companies in Illinois, Mexico and Guatemala, specializing in the production of synthetic cortisone. He found a greater resource than soybeans in a wild growing yam in the jungles of Guatemala. He sold his Illinois company in 1961 for $2.3 million, becoming one of the nation’s first black millionaires.

Julian won numerous awards. Most notable were his election to the National Academy of Sciences and the NAACP Spingarn Medal.

Percy Lavon Julian died on April 19, 1975. In 1990, he became one of the first African Americans inducted into the National Inventors Hall of Fame.