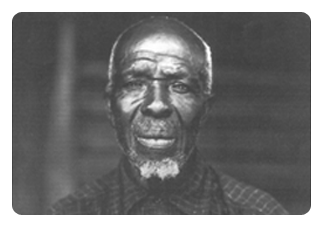 Cudjo Lewis is recognized as the last person born on African soil to have been enslaved in the United States when slavery was still lawful.

The last recorded slave ship importing slaves from Africa to the United States was the Clotilda. Fifty-two years after the country abolished the international slave trade, this ship arrived, illegally, in Mobile, Alabama on Sunday, July 8, 1860.

Cudjo Lewis was the last survivor of this ship. Lewis helped found the settlement of Africatown – outside of Mobile – with former slaves from the Clotilda.

Lewis was born as Oluale Kossola in the West African country currently known as Benin. He was a member of the Yoruba people and was the second of four children.

At the age of 14 he began training as a soldier. He learned the essential skills of hunting and tracking animals and defending his town. Lewis was inducted into the Oro, a secret Yoruba male society, charged with the role of policing and controlling society.

In April 1860, King Ghezo, of Dahomey, and his army attacked the town, killing the king and many of the townspeople. Survivors of the attack, including Lewis, were taken captive.

Lewis and other members of his tribe were sent to Abomey, the capital of Dahomey. They were then held in Ouidah for three weeks in a barracoon (a prison where captives were held before being sent across the Atlantic).

Lewis and 109 others from various regions of current-day Benin and Nigeria boarded theClotilda to travel on the dangerous journey across the Atlantic known as the Middle Passage. Mobile ship builder, William Foster captained the ship.

During the 45-day journey, Lewis and the other captives were faced with thirst and the humiliation of being on board naked.

Once in Mobile, James Meaher, a wealthy ship captain and brother of Timothy Meaher, the man who organized the expedition, bought Lewis.

Meaher was unable to pronounce Lewis’s name, so he told his owner to call him ‘Cudjo’, a name given by the Fon and Ewe peoples of West Africa to boys who are born on Monday.

When emancipated in 1865, he took on the surname Lewis. During the last years of his life, Lewis’s story became known when journalists interviewed him about his life.