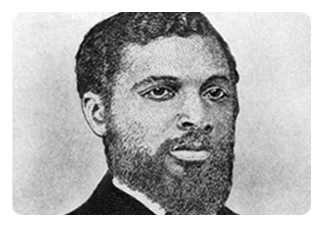 During the time known as the Reconstruction Era in the United States, a young man from Alabama rose to political prominence, becoming one of three African-Americans elected to represent Alabama in Congress.

James T. Rapier was born on November 13, 1837, in Florence, Alabama. The son of a successful and wealthy barber, Rapier was afforded the opportunity to be educated by private tutors. At an early age, Rapier moved to Nashville, Tennessee, where his grandmother raised him. He later migrated to Canada and settled on his uncle’s land in Buxton, Ontario, a community that had been established by former slaves who had escaped via the Underground Railroad. He received educational instruction at the Buxton Mission School and went on to pursue his interest in law at Montreal College.

In 1865, Rapier returned to Tennessee and started a career in cotton farming. He became an activist for the black community, particularly for voting rights. By 1866, Rapier was back in Alabama, where he became a major player in state politics, serving as the only black delegate to the Alabama Constitutional Convention in 1867. By diplomatically appealing to both Republican blacks and whites, he was able to advance the Republican platform successfully. After serving at the Constitutional Convention, Rapier became involved with the National Negro Labor Union (NNLU), serving as its vice president in 1870. The following year, he established the first branch of the NNLU in Alabama and led it as president and executive chairman. As Rapier gained political clout, he set his sights on being elected to state office. He made an unsuccessful bid for Secretary of State in 1870, but his efforts gained him a measure of notoriety since his candidacy marked the first time an African-American had run for statewide office in Alabama.

Two years later, the relationships he developed in his cotton planting career helped give him an edge over his opponent in the election for Alabama’s 2nd Congressional District Representative. During his only term in Congress, he was an advocate for the newly freed slaves in the hostile post-Reconstruction South. He championed allocating federal funds to establish schools, to create a land bureau in order for freedmen to access Western lands and most notably, he fought for passage of the Civil Rights Bill of 1875.