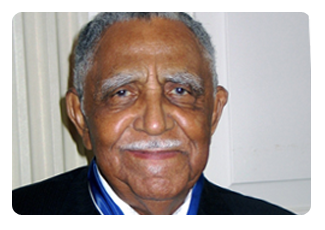 The name Joseph Lowery is nearly synonymous with the words civil rights. For most of his life, Lowery was a key figure in national civil rights activities dating back to the 1950s. A Methodist minister, Lowery worked beside the Rev. Martin Luther King, Jr., serving as a visionary whose contributions were pivotal to the success of the Civil Rights Movement. His contributions earned him the title “Dean of the Civil Rights Movement” because of his diligence and determination to create equality for all races and ethnicities.

Joseph Echols Lowery was born on October 6, 1924, in Huntsville, Alabama, to Leroy and Dora Lowery. He experienced the extreme hatred toward blacks living in the Deep South at an early age. After graduating from William Hooper Councill High School, he attended Knoxville College, Alabama A&M College and graduated from Paine College. From Ku Klux Klan altercations to police brutality, Lowery endured decades of racism. These experiences led him to the ministry and to become a leader in the Civil Rights Movement.

In 1952, Lowery became the pastor of Warren Street Methodist Church in Mobile, Alabama, where he quickly became involved in the Civil Rights Movement. In 1957, he co-founded the Southern Christian Leadership Conference (SCLC) with Martin Luther King, Jr., Fred Shuttlesworth, Ralph Abernathy and several other leaders. He presided over the SCLC chapter in Atlanta for many years and was the national president from 1977 to 1997. Relying on their faith, these men worked together to create equality within the United States through peaceful actions. Lowery secured a place in the history of the Civil Rights Movement by being a strong advocate for several peaceful acts such as the Montgomery Bus Boycott and the Selma to Montgomery March.

During his fight for equality, the state of Alabama filed a libel suit against Lowery and the SCLC. Although clearly innocent, they were found guilty and ordered to pay $3 million. This legal attack, however, did not deter Lowery and the SCLC who used the libel suit, harassment, disrespect, and even abuse they endured to fuel their hunger for equal rights. Lowery’s journey in the Civil Rights Movement was difficult, yet he persevered and remained strong when his people needed him most.

Lowery’s contributions to equality and civil rights did not go unappreciated. To this day, he receives recognition for his leadership and dedication during the Movement. He has been awarded several honorary doctorates from noted historically black colleges and universities (HBCUs). Organizations such as the National Association for the Advancement of Colored People (NAACP) and the Urban League have honored him with Lifetime Achievement awards. One of his most recent awards is the Presidential Medal of Freedom presented to him by President Barak Obama in 2009.