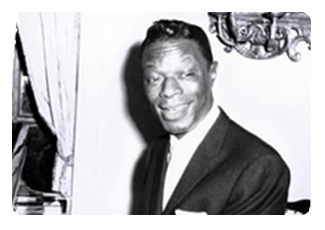 Known as Nat King Cole, Nathaniel Adams Coles was born in Montgomery, Alabama, on March 17, 1919. When he was four years old, he and his family moved to Chicago. Cole learned to play the organ from his mother, Perlina, the church organist. His first performance was of “Yes! We Have No Bananas.” Cole began formal lessons at the age of 12. He eventually learned not only jazz and gospel music, but European classical music as well.

Inspired by the performances of his role model, Earl Hines, Cole began his performing career in the mid-1930s while still a teenager. He dropped the ‘s’ and took the name “Nat Cole.” He went on to join a band that his older brother, Eddie, a bass player, formed. They made their first recording in 1936 and were regular performers at clubs. Cole, in fact, acquired his nickname, “King,” performing at a jazz club. He also was a pianist in a national tour of Broadway theatre legend Eubie Blake’s revue, “Shuffle Along.”

Cole and two other musicians formed the King Cole Swingsters. The group later became known as the King Cole Trio. They played together throughout the late 1930s and recorded many radio transcriptions.

The King Cole Trio signed with the raw Capitol Records in 1943. Revenues from Cole’s record sales fueled much of Capitol Records’ success during this time frame. The revenue is believed to have played a significant role in financing the distinctive Capitol Records building in Los Angeles. Completed in 1956, it was the world’s first circular office building and became known as “The House that Nat Built.”

On November 5, 1956, The Nat King Cole Show debuted on NBC-TV. The show was the first of its kind hosted by an African-American. Beginning as a 15-minute pops show on Monday night, the program was later expanded to 30-minutes. The show eventually ended due to lack of a national sponsorship.

The last episode of “The Nat King Cole Show” aired December 17, 1957. The show had survived for over a year, and it was Cole, not NBC, who ultimately decided to pull the plug on the show. Commenting on the lack of sponsorship his show received, Cole quipped shortly after its demise, “Madison Avenue is afraid of the dark.”