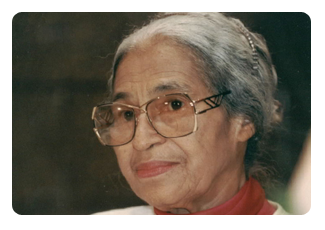 The birth of the Modern Civil Rights Movement began Dec. 1, 1955, the day Rosa Parks, a seamstress and Youth Director of the NAACP, refused to give up her bus seat to a white male passenger. Her refusal spurred the Montgomery Bus Boycott, as well as sparked a nationwide movement that ended legal segregation in America.

Born Rosa Louise McCauley on Feb. 4, 1913, in Tuskegee, Alabama, she attended a one room school house in Pine Level, Alabama until the fifth grade and then the Montgomery Industrial School for Girls at age 11 in Montgomery, Alabama. Later, she attended Alabama State Teachers College (a high school). Rosa McCauley had to drop out of high school to care for her ill grandmother and later her mother. Following her marriage to Raymond Parks in December, 1932, she returned to Alabama State Teachers College in 1933, with her husband’s encouragement, and received her diploma. They both joined the local chapter of the NAACP to help improve the plight of African-Americans in the South.

On December 1, 1955, after a long day at Montgomery Fair Department Store where Mrs. Parks worked as a tailor’s assistant, she boarded the Cleveland Avenue bus to go home. She sat in the first of many rows that were designated for “colored” passengers. When a white man entered the bus, the driver (following the standard practice of segregation) told four African-Americans to give up their seats to the white passenger because the white section was full. Parks refused. The bus driver called the police and Parks was arrested. Later at her trial, she was found guilty of violating the city ordinance (the Montgomery Bus Code), received a suspended sentence and was fined $10.00 plus $4.00 in court costs.

On the night of her arrest, the local NAACP chapter began to organize a boycott of Montgomery’s city buses in protest of Parks’ arrest. Handbills were distributed and ads were placed throughout the African-American community asking blacks not to ride buses on Dec. 5, 1955. Parks helped with the organization and collaborated with civil rights leaders, including Reverend Dr. Martin Luther King Jr., a new minister who gained national prominence in the Civil Rights Movement. The Montgomery Bus Boycott lasted for 381 days, producing a serious economic impact on the transit company. On November 13, 1956, the U.S. Supreme Court ruled that segregation laws in public accommodations were unconstitutional, thereby, ending segregation on public buses in Montgomery, Alabama. On December 20, 1956, the Supreme Court Order was finally implemented and citizens of color returned to the buses the next day.

The bus boycott sparked the most successful nonviolent movement in support of civil rights in the United States.

Throughout her lifetime Parks received many accolades, including the NAACP’s Springarn Medal, the Martin Luther King award, the Presidential Medal of Freedom and the Congressional Gold Medal. Parks was named one of Time magazine’s 20 Most Influential People.

On Oct. 24, 2005, Rosa Parks, 92, died at her home in Detroit. Several memorial services, including one in Montgomery, were held honoring her decades of unwavering dedication to fighting inequalities. Her body laid in honor at the Capitol Rotunda in Washington, D.C., the first woman and the first person of color to lie in honor at the US Capitol. She was returned to her final resting place in Detroit (her home of 51 years) to a chapel renamed the Rosa L. Parks Freedom Chapel.

Following her death, in 2006, the Rosa Parks Bill was introduced and passed by the Alabama State House in Montgomery, removing the 1955 charges from her police record.