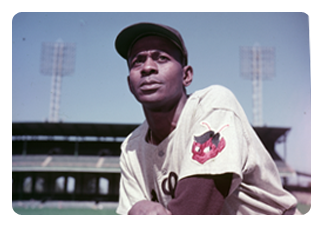 Satchel Paige was the greatest pitcher in the history of the Negro League and one of the greatest players, black or white, of all time. His pitching was amazing and his showboating was legendary.

His feats included 64 consecutive scoreless innings, a stretch of 21 straight wins, a 31-4 record in 1933. In 1971, Paige became the first of the Negro League stars to be inducted into the National Baseball Hall of Fame.

Paige was in his 40s when he joined the Cleveland Indians during the 1948 pennant race; the oldest rookie in major league history.

Born Leroy Robert Page on July 7, 1906 (his birth year is uncertain), in Mobile, Alabama, he was the seventh of 12 siblings. In the mid-1920s his family changed their name from Page to Paige to distant themselves from John Page, their father, and to make themselves sound more “high toned.”

He earned his nickname, Satchel, when he was a young boy carrying bags (and satchels) at the Mobile railroad station for passengers.

When he was 12, he was incarcerated at the Industrial School for Negro Children in Mount Meigs, Alabama, for truancy and shoplifting. While there, he developed his pitching skills. When he left the school in 1923, he joined the Mobile Tigers, a semi-pro baseball team in the Negro League.

Paige played 22 years for numerous black teams in major cities before realizing his dream of playing in the major league.

In 1948, Paige finally got his chance when Cleveland Indians owner, Bill Veeck, signed Paige to play for the all-white team. After playing two seasons with the Indians, Paige played three years for the St. Louis Browns.

When Paige was about 60 years old, he threw his final three shutout innings with the Kansas City Athletics in 1965. His last appearance in a major-league uniform came when he was signed as a coach by the Atlanta Braves in 1968.

During his career, Paige became a national celebrity. He co-starred in the Western “The Wonderful Country” (1959) and had a best-seller with his autobiography “Maybe I’ll Pitch Forever” (1962).

On June 8, 1982, Paige died of emphysema; he was believed to be 75. His death came three days after he attended the dedication of a ballpark in Kansas City, Missouri, that was named in his honor, the Satchel Paige Memorial Stadium.