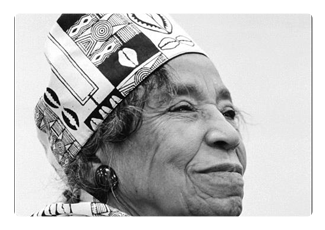 Amelia Boynton Robinson was born in Savannah Georgia on August 18, 1911, to George Platts and Anna Elizabeth Hicks Platts. From her parents, she and her siblings learned four life principles: daily prayer, always help and show compassion for others, stand up for the morally right, and become economically independent.

At the age of 9 Ms. Robinson began her amazing journey to secure the right to vote for all Americans. Traveling with her mother in a horse-and-buggy, she handed out leaflets for the Women’s Suffrage Movement. At 16 Robinson enrolled at Tuskegee University and began her education with Dr. George Washington Carver. While at Tuskegee she also ran track and was the captain of the girls basketball team.

An accomplished writer, Ms. Robinson wrote her first stage play, Through the Years, in 1936 to raise funds for the construction of a community center in Selma, Alabama that would welcome African Americans. Through the Years debuted in Selma and went on to be performed around the world. With help from the Works Progress Administration (WPA) and First Lady Eleanor Roosevelt, the center was completed and opened.

In 1955 Ms. Robinson organized the first boycott by African Americans in Alabama after a Selma woman died due to injuries sustained from being dragged by a bus, and that same year she personally boycotted most of the Selma white-owned stores that did not hire African Americans.

In the 1960s the pace of Civil and Voting Rights activities reached its peak and Ms. Robinson was racing along with it. On February 29, 1964, Robinson became the first woman ever to seek a seat in Congress from Alabama, winning ten percent of the vote when only five percent of the registered voters in her district were African American.

Amelia and Sam made their offices and home a headquarters for the Southern Christian Leadership Conference (SCLC). Sit-ins, marches, campaigns, protests, and numerous other events were planned and evaluated at the Boynton home in Selma. The “Bloody Sunday” attempted march from Selma to Montgomery to protest African American exclusion from voting was planned at the Boynton home. Then on March 7, 1965, Ms. Robinson marched at the head of the demonstration. Selma Sheriff Jim Clark ordered officials to breakup the march and beat any protester who would not leave. Robinson was one of the first victims; she was struck down and presumed dead at the foot of the Edmund Pettus Bridge. In the days that followed, the famous photograph of Robinson aroused anger and disgust throughout the United States and the world.

After Ms. Robinson was released from the hospital, Martin Luther King, Jr and several US Congressmen met at 1315 Lapsley Street to produce the first draft of the Voting Rights Act of 1965; later that year Robinson was invited to the White House when President Lyndon B. Johnson signed the Act into law.

Ms. Robinson has served as a board member and vice-chairperson of the Schiller Institute, an organization Schiller founded to defend the rights of all humanity. In her 60’s Robinson wroteBridges over Jordan, which was published by The Schiller Institute. Robinson was the co-founder of the International Civil Rights Solidarity Movement. Robinson has received numerous awards including the Martin Luther King, Jr. Foundation Medal of Freedom, the medal of Italy’s Lombardy Region from President Roberto Formigoni, and the National Visionary Leadership Award.

Living by the principle given to her by her parents to always help and show compassion for others, in 2007 Ms. Robinson attended the funeral of Sheriff Jim Clark, the man who gave the orders that, on more than one occasion, resulted in beatings for her and other civil rights protestors.