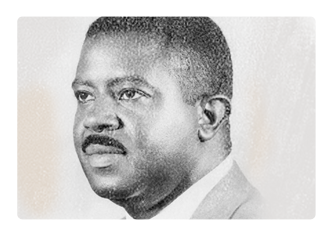 Pastor, Veteran, Author, Advisor, Co-founder of the Southern Christian Leadership Conference, and Civil Rights Activist were only a few of the titles Reverend Ralph David Abernathy held during his lifetime. Abernathy was born on March 11, 1926, in Linden, Alabama. From organizing the historic yearlong Montgomery bus boycott, to leading the Poor People’s Campaign of 1968, he was deeply involved with leveling the playing field and improving the lives of African Americans throughout the country.

Ironically, Abernathy was first called upon to defend the constitution and the civil rights of all U.S citizens when he served in the U.S. Army during World War II. However, when he returned to Alabama and to civilian life, he realized that his fighting days were long from over. Abernathy attended Alabama State University and graduated with a degree in mathematics in 1950. He continued his education receiving a master’s degree in sociology from Atlanta University.

In 1951 Abernathy became the pastor of the First Baptist Church in Montgomery, Alabama and Dean of Students at Alabama State. On August 31, 1952 Abernathy married Juanita Odessa Jones of Uniontown, Alabama. Mrs. Abernathy also played a major role in the civil rights movement. In 1954 a young minister from Atlanta came to Montgomery to lead a nearby church and Abernathy became an advisor to Martin Luther King, Jr. Abernathy and King’s friendship grew over the years and together they organized protests, sit-ins, and marches. Abernathy was arrested with King 17 times and was always by King’s side, including when he was assassinated on April 4, 1968, in Memphis, Tennessee.

In 1955, after the arrest of Rosa Parks for not relinquishing her bus seat to a white patron, Abernathy and King organized a boycott of the Montgomery bus system that forced the system’s racial desegregation in 1956. This nonviolent boycott marked the beginning of the civil rights movement that changed American society. Unfortunately, Abernathy’s nonviolent methods to achieve equality were rewarded with threats and the bombings of his church and home.

In 1957 Abernathy worked with King and others to establish the Southern Christian Leadership Conference, the most prominent civil rights organization in the south. King was the first president to lead the new organization. Abernathy served as secretary-treasurer, vice president, and president.

In 1963 Abernathy was one of four African American ministers sued for supporting a New York Times ad criticizing Alabama police. In the landmark New York Times v. Sullivan decision, the Supreme Court reversed the guilty verdict, thus, limiting public officials’ right to seek damages from critics. In 1968 Abernathy led the Poor People’s Campaign, which included a march on Washington that led to the creation of the Federal Food Stamps Program. In 1989, his autobiography And the Walls Came Tumbling Down was published. Ralph David Abernathy died on April 17, 1990, in Atlanta, Georgia.