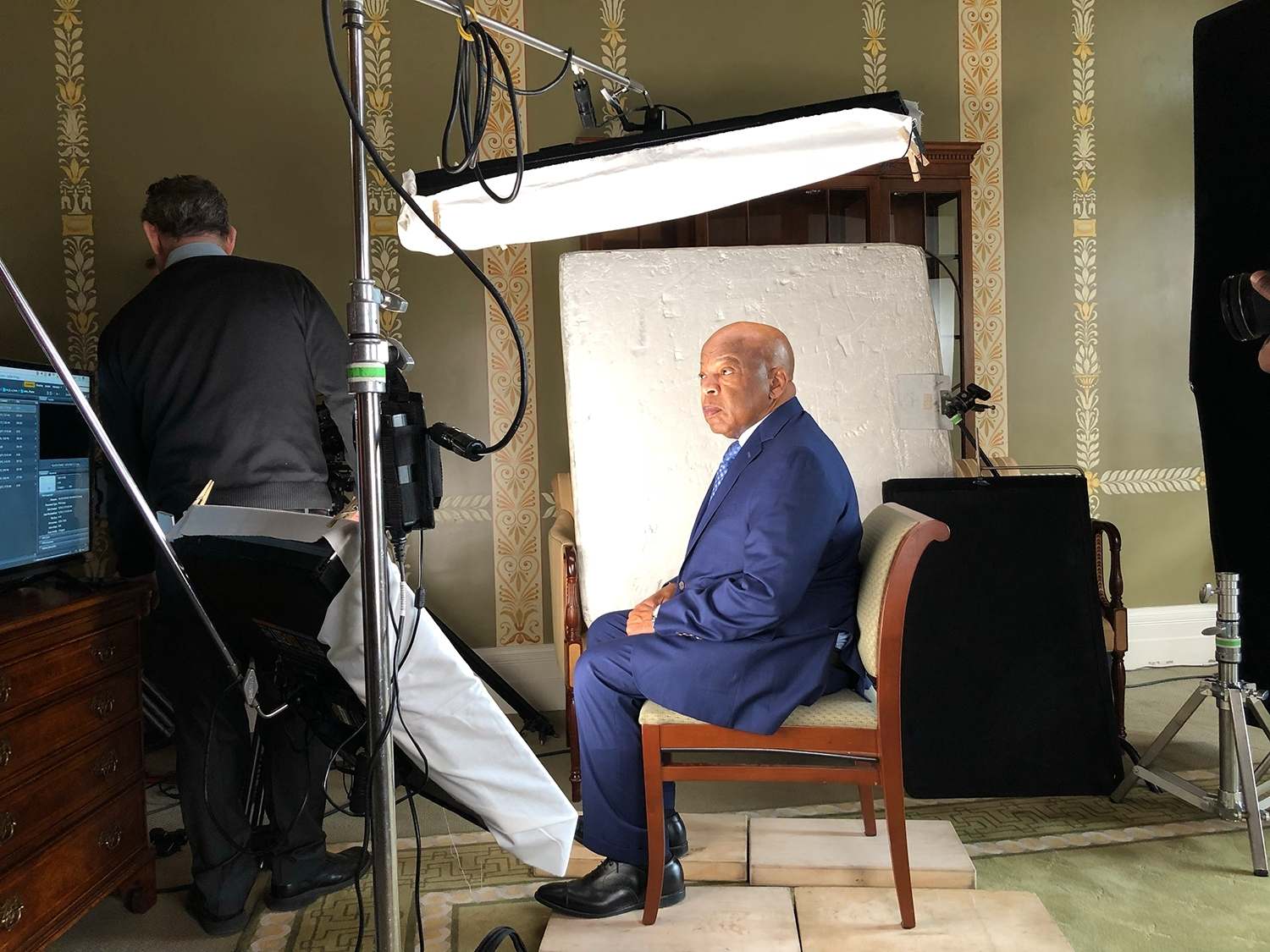 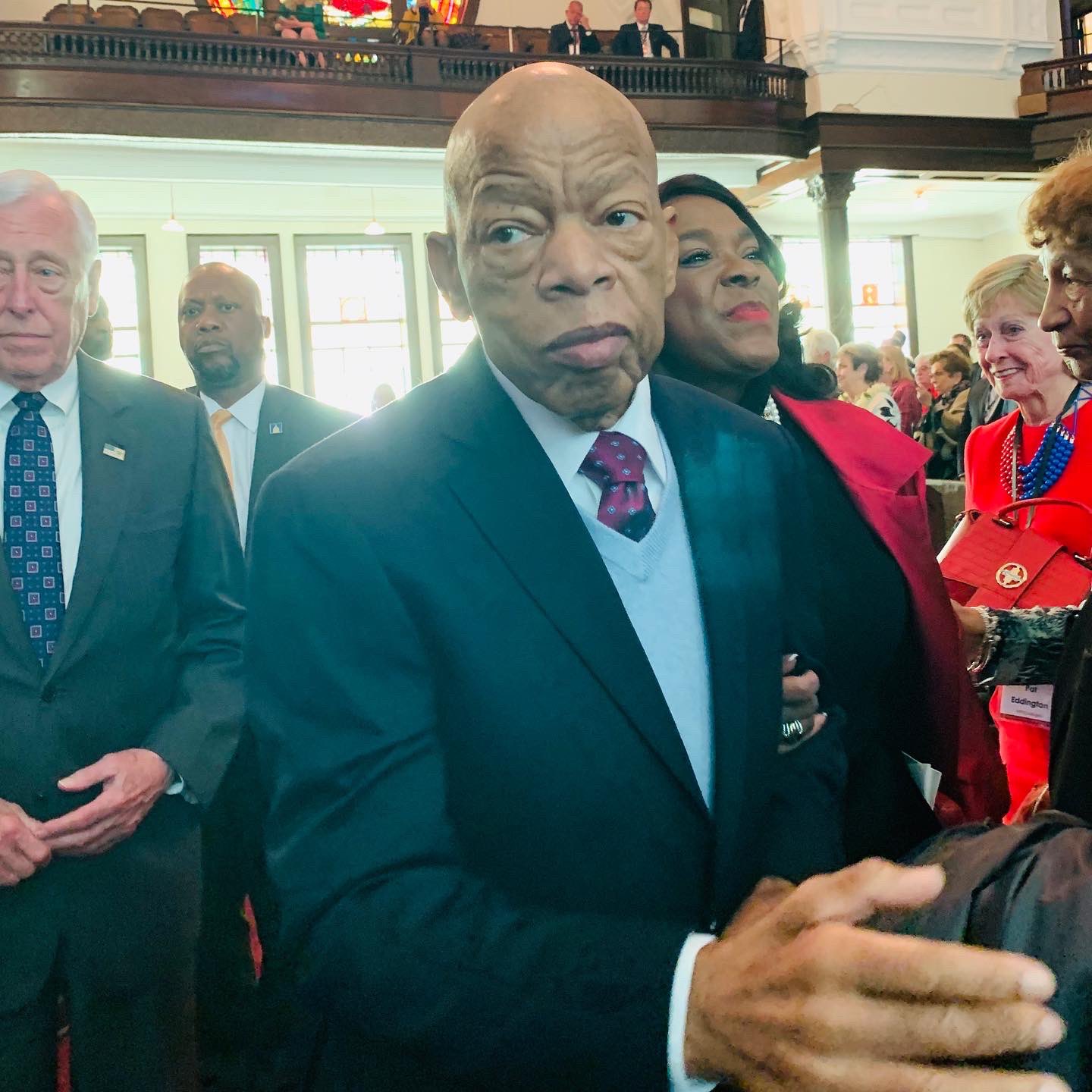 Born in Pike County, Alabama, on February 21, 1940, to sharecropper parents, John Lewis was one of 10 children. After attending local county schools, he hoped to attend Troy State College (now Troy University) in Troy, Alabama. Due to the pressures of segregation and costs, Mr. Lewis instead attended American Baptist College in Nashville, TN, where students could work in exchange for their tuition.

After contemplating transferring to Troy State College, he wrote to Martin Luther King Jr. about his plan to challenge the school’s segregation policy. Fortunately for all of us, after his meetings with Dr. King and other civil rights leaders he decided to forego his plan to desegregate Troy State College. Instead he turned his focus to the Civil Rights Movement and started to organize sit-ins at segregated lunch counters and participate in the Freedom Rides. 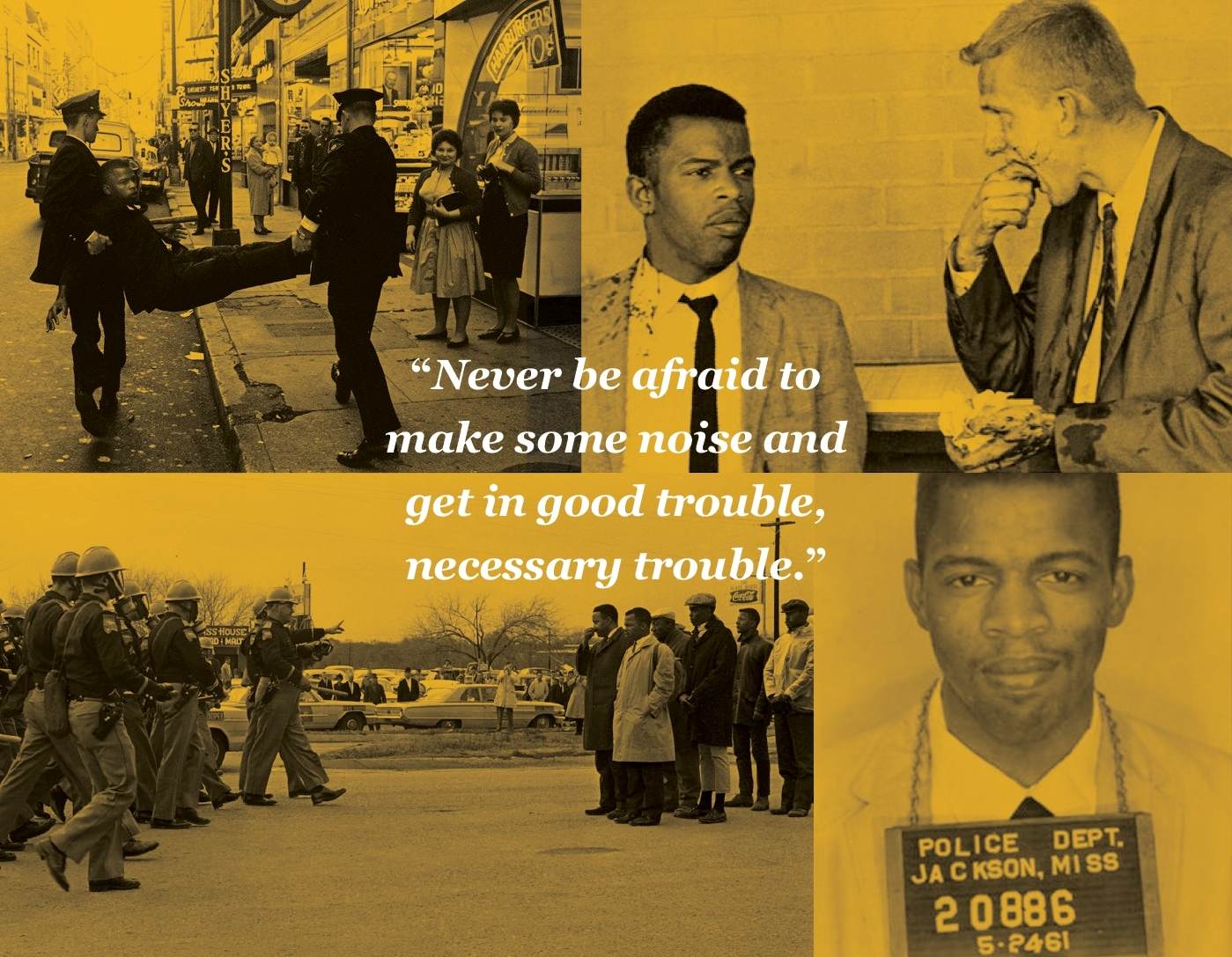 Clockwise from top left: College student John Lewis being removed by police from a segregated restaurant in Nashville, TN after leading a sit-in, c. 1960’s.
(The Tennessean)

Lewis and fellow Freedom Rider James Zwerg, after they were attacked by segregationists in Montgomery, AL, May 1961.
(Bettmann/Corbis)

John Lewis’ booking photo after his arrest in Jackson, MS.  (FBI)  After Montgomery, the Freedom Riders continued under federal protection to Jackson, where they were immediately arrested and jailed for breach of peace.

Lewis (light-colored trench coat) and other marchers are confronted by a police blockade during the infamous “Bloody Sunday” march in Selma, AL, March 7, 1965.
(Spider Martin)

Mr. Lewis served as the chairman for SNCC (Student Nonviolent Coordinating Committee), the student organization of the Southern Leadership Conference. As the youngest speaker at the “March on Washington for Jobs and Freedom,” in 1963, Lewis challenged participants to continue the work of equality in spite of those who said to “be patient and wait.”

As a leader in the Civil Rights Movement, Lewis was brutally beaten while participating in the Freedom Rides in Montgomery, Alabama, and when crossing the Edmund Pettus Bridge in the Selma to Montgomery voting rights march (Bloody Sunday). Fifty-five years later, on March 1, 2020, Lewis returned to the Edmund Pettus Bridge and encouraged everyone to “Get in good trouble, necessary trouble, and redeem the soul of America.” 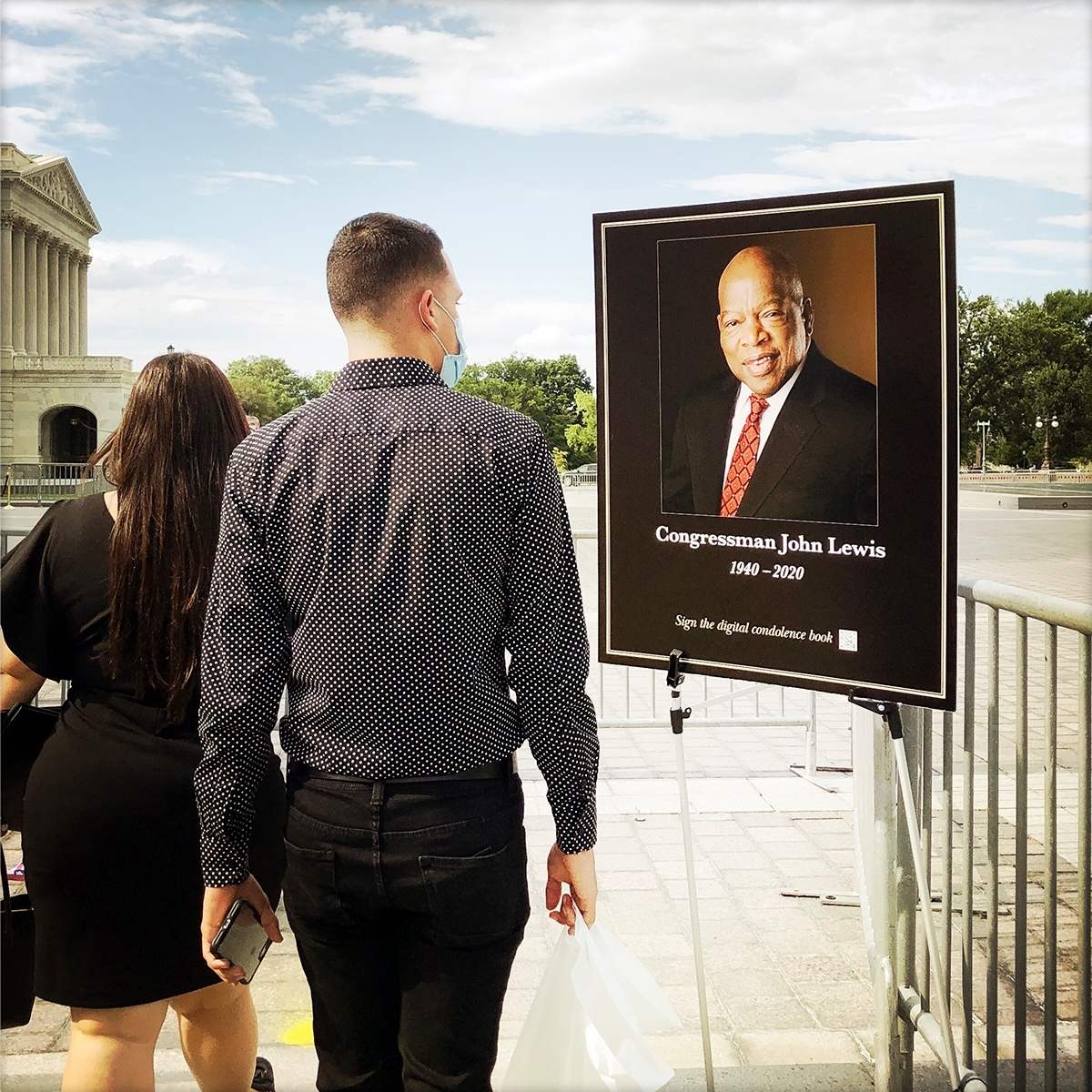 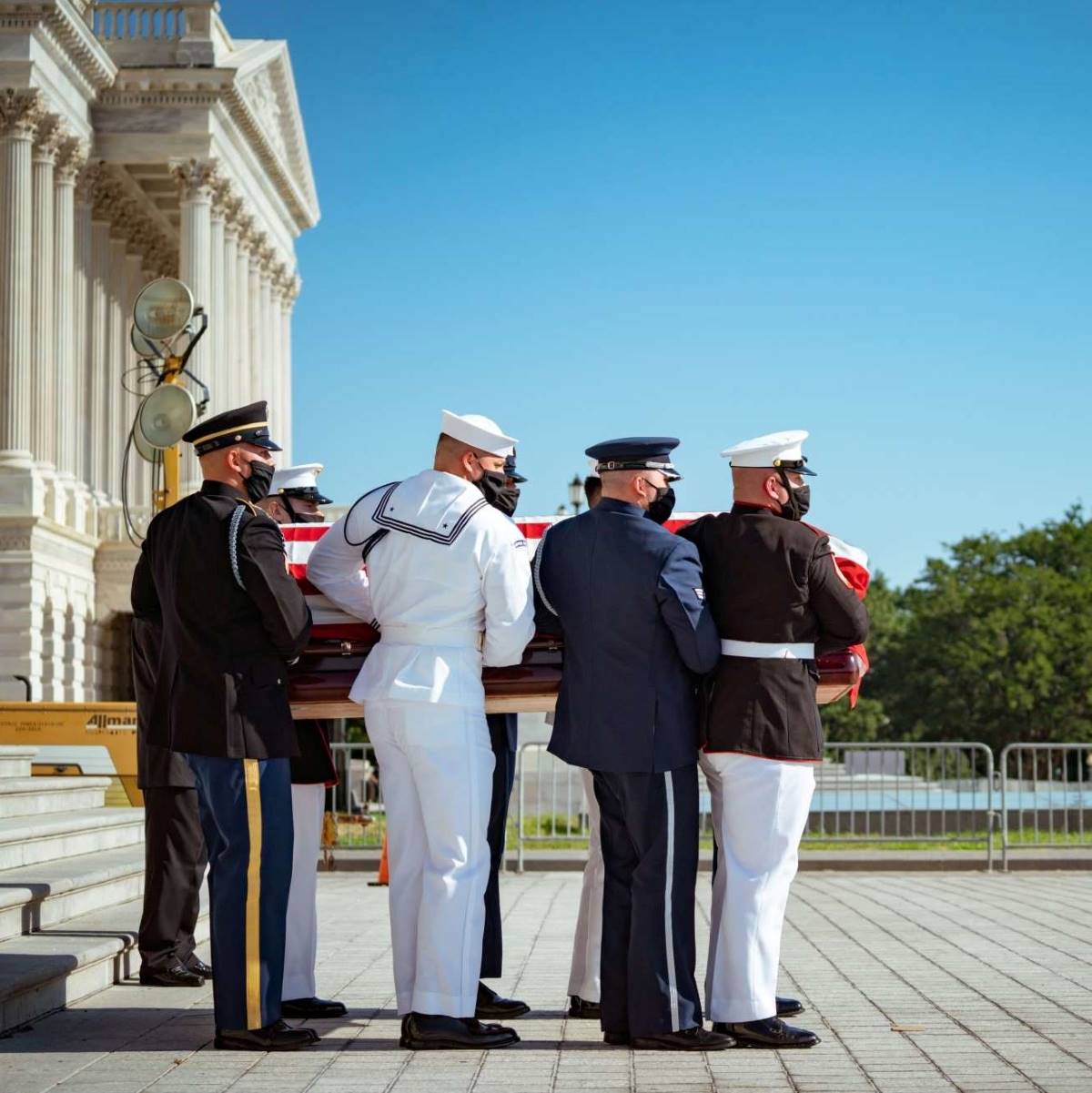 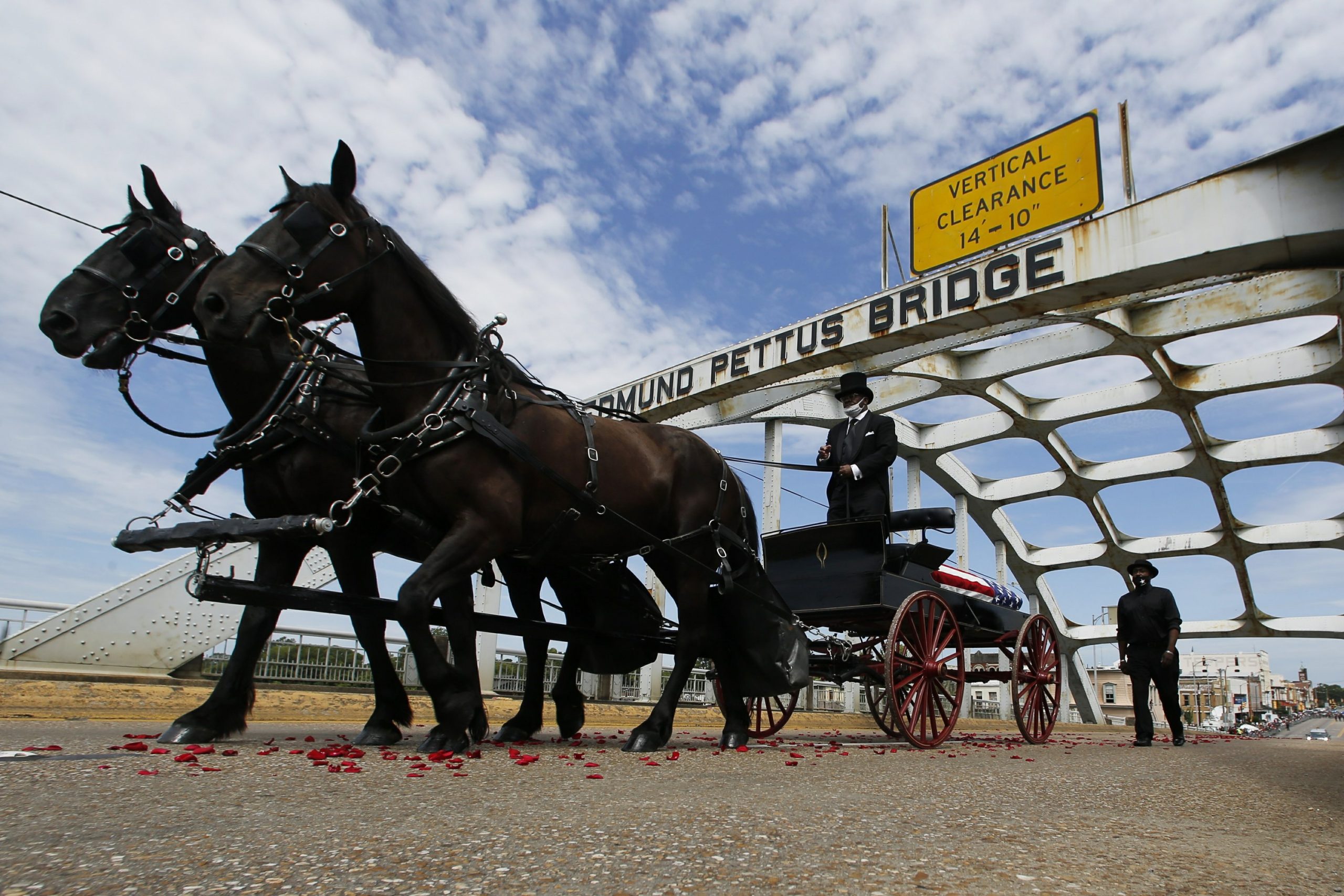 In 1986, Lewis was elected to represent Georgia’s Fifth Congressional District, becoming only the second African American to represent Georgia in Congress since Reconstruction. His dynamic leadership for justice for all, nonviolence, and civil and human rights earned him the reputation of being the “conscience of Congress.”

During his lifetime Lewis was honored with a Presidential Medal of Freedom, the NAACP Spingarn Medal, the National Education Association Martin Luther King Jr. Memorial, and the John F. Kennedy “Profile in Courage Award” for Lifetime Achievement. He was also named to Alabama’s Academy of Honor.

Representative John Robert Lewis served as a member of Congress for 33 years before his death from pancreatic cancer on July 17, 2020.

Representative John Lewis’s final words in the New York Times. ‘Democracy Is Not a State. It Is an Act.’

Primary sources from the Alabama Department of Archives and History: Photos of John Lewis from Bloody Sunday, March 7, 1965:

Watch this 1 minute Legacy Moment from Alabama Public Television about the Selma to Montgomery March.

Read John Lewis’ speech for the “March on Washington for Jobs and Freedom,” 1963. (There are two versions of the speech that you can read and compare.)