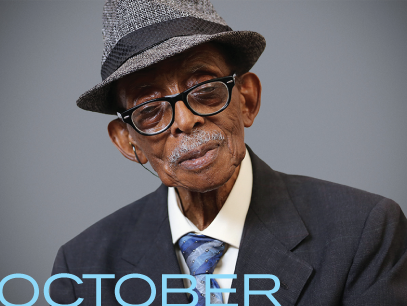 ISAAC WHITE,SR. WAS BORN TO SHARECROPPERS in Wilkerson County, Mississippi, in 1919. When he arrived in Mobile, Alabama in 1942, he didn’t realize he would become a pillar in the community, but that is exactly what happened. In 1960, he opened White’s Barber College and for the next six decades, he taught, mentored, and served as a role model to hundreds of students. When a student completes the program at the college’s red brick building on the corner of Martin Luther King Jr. Avenue, they leave with a valuable skill, invaluable life lessons, and no student debt. White’s barbering course fees are waived for all students who meet the requirements to receive a barber’s license and secure a job by the end of the program.

During the Great Depression, White joined the Civilian Conservation Corps (CCC), President Franklin D. Roosevelt’s New Deal jobs program. While working in Georgia, White picked up a pair of scissors and began his barbering career. In 1944, two years after he moved to Mobile, Alabama to work as a truck driver at Brookley Air Force base, White opened his first barber shop with only one chair.

From the beginning, White’s parents instilled in him the importance of putting God at the forefront of his life. For 10 decades he has embodied that value through his words and actions, and every Sunday, since 1945, White has been walking through the doors of Stone Street Baptist Church. For White, the only way to serve God is through helping people, and he has been serving God for almost 100 years. One of his favorite pearls of wisdom that he gives to his students and the young people in the community is, “Don’t catch the devil’s ball. He’ll strike you out every time.” This means stay focused on your goals, and don’t let outside distractions make you lose your way. 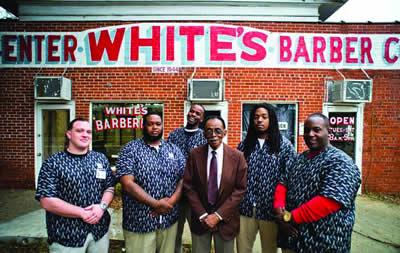 White, viewed as a loving but strict grandfather by his students, has three simple rules: Come to school, follow instructions, and be honest. In order to receive the tuition waiver, students must adhere to a dress code, complete the 1,500 hours of training, pass all tests, and work for a minimum 3 months after graduation in a licensed barber shop. Although White is approaching the century mark, he still rises early in the morning, dresses in a coat and tie, and drives to work so he can open the school’s doors promptly at 8:00. White views the barber college as his ministry, so each student gains more than a skill.  They also receive a lot of love and a friend for life.

In 2015, the City of Mobile added the street sign “Honorary Isaac White, Sr.” at the intersection of Martin Luther King, Jr. Ave. and Peach St., the site of White’s Barber College, to recognize his exceptional work in the community. In 2017, during Black History Month, White was recognized by Allstate Insurance Company in their national “Worth Telling” campaign for creating career opportunities for the underserved.

A humble man, White credits God for all his blessings. “I thank God for the opportunity to minister this way. I couldn’t have done this myself; I’m from the backwoods of Mississippi. God gave me what I need. I just thank God for it, and for these students under my supervision.”